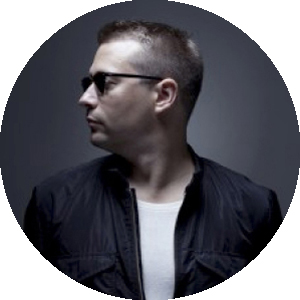 Forever with his thumb cocked looking for the next creative thrill ride as the sun goes down, Guillaume Coutu-Dumont’s music lends itself to the indigo hue of dusk, imbued with the sultry allure of jazz, the unquestioned groove of house, and the propulsion of techno.
As a solo producer, Guillaume was already causing atmospheric disturbances ahead of his debut album “Face À L’Est”, which appeared on Musique Risquee in 2007. Before the inception of his one-man band, Guillaume was moving and shaking with other protagonists via the Egg project with Julien Roy, Chic Miniature with Ernesto Ferreyra and Luci with David Fafard. All these projects share their history with the lauded Mutek festival, which Guillaume has been closely involved with since 2002.
After forging friendships with the Oslo Records and Raum Musik crews, Guillaume made a logical pilgrimage to Berlin in 2007. There has always been an undeniable leaning towards the soulful and the spiritual in Guillaume’s work, and even a move to one of the techno centres of the world could not shake him from a musical path that favours the organic, fundamental roots of dance music.
Beyond his achievements in modern beats, Guillaume has a rich and varied history of music experience, from percussion for a funk band to studies in Latin and classical percussion, a university course in electro-acoustic composition to years spent working in a Montreal studio, a contemporary jazz formation which produced two albums and a tour around Senegal.