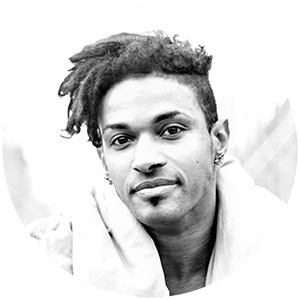 Yaya grows up in Torino, in the resonant Babylon of his home, where the rhythms of his father’s, singer and leading voice of the ensemble M’bamina, drums prophesied a multi-ethnic Italy. During the 70’s the sound of M’bamina spread an exotic afro-beat sound in the smoky clubs of the cold Torino of those days. As a boy Yaya grew up surrounded by the sound of the albums released by one of the pioneer band of afro sound in Italy.Since his teen age, Yaya approaches with the rhythm  performing as a drummer around the city.
It is when at the age of 17 he purchases a pair of decks, that his blood’s rhythm takes an electronic turmoil driving him to house music: Yaya begins then playing at clubs and parties of the flourished techno-house scene of Turin. At 18, he lands  for the first time in the island of music hedonism, Ibiza; his vivacity lead him to play at several afterhours and his musical  assertiveness allowed him to be noticed by the entrepreneurs of the white island’s big electronic circus. In the afternoons, Yaya spent hours mixing synths of his hybrid sound, storing up a vast library of tracks.

The arias of Yaya’s scores reach the ears of Loco Dice, who falls in love with the Afro Latin rumba of Fresca de l’Agua  and decides to record the Vecute ep. The phone call, the turning point that changes his biography, Yaya receives it in 2009 in Africa: <<Hello Yaya? This is Dice>>. Yaya thus becomes part of the Desolat family. So far, following the orbit of  Desolat’s circles, he has landed in the big meccas of European electronic music: Fabric, Watergate, the Iarmaroc Fest in Romania,  the Bermuda festival in Berlin, Row 14 and Goa in Barcelona , Sankeys in Manchester, Mint in Leeds, Silo in Liverpool, Mad in Lousanne, Cocoricò, Magazzini Generali…Yaya joins Desolat events during the Miami Music Conference, plays in New York City and around US, in South America and in Africa.

In the 2013 summer season in Ibiza, Yaya performs at opening and closing of Space as during the We Love’s with Savana Potente dates in August, furthermore at the daily Loco Dice’s Used & Abused at Ushuaia, at the Tini & the Gang party at Sirocco beach and at Zoo Project. Yaya is a very prolific producer and in these years, his tracks has been released in  vinyl and digital by Desolat, Cadenza, Be As One, Kina Music, Kiara Knock Knock series, Souvenir Plus, Etruria Beat, Maison d‘être, Earlydub, Draft, Hoenregler, Hummingbird Label, Oblack records. Studio is where Yaya visaulises himself during the winter as aboard another flight with Desolat and playing another gig at Savana Potente, his playground, the best party in town.