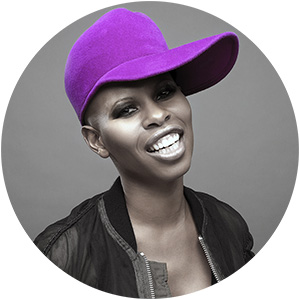 “I see myself as an artist more than a musician, not only because I play guitar worse than a deaf camel, but because being in a band has always required a lot more skills than just songwriting and singing,” says Skin. “You have to dip your fingers in other art forms (like film, theatre, books) in order to create something wonderful from the clash of egos which are part of being in a great band.”
Skin is one of Britain’s leading female rock singers. She is also a fashion icon, a renowned DJ, a charity activist, and an inspiring role model for different generations of fans. Born and brought up in Brixton, south London, she defied expectations as a black woman vocalist by diving headlong into hardcore rock, rather than becoming a soul session singer. Since she emerged in the early ‘90s with Skunk Anansie, Skin has been a groundbreaking presence. “I’m not up there trying to be a babe. I’m sexual but not in a girly, wimpy way. Our music has attitude, it’s in yer face, so I have my own parameters,” she said in 1995.

In 1992 Skin gave up her career as an interior designer to write songs and devote herself to music. She played in bands on the North London indie scene before joining forces with bass player Cass and guitarist Ace to form Skunk Anansie (so-called after the West African folk tales of Anansi, the spider man). The group played their first gig at London’s Splash club in 1994 and within a year were voted Best New British Band by the readers of Kerrang! Magazine. After the award ceremony drummer Mark Richardson joined the band as their permanent drummer.

A multi-racial band with a sound that collides brooding, funky beats with edgy lyrics, driving riffs and fragile ballads, Skunk Anansie broke barriers from the start. When someone once asked her about Brit-rock, Skin jokingly replied: “We’re more clit-rock than Brit-rock”, and the term “clit-rock” was then celebrated as an alternative to macho “cock rock”. By 1995 the group appeared with two of their songs, ‘Feed’ and ‘Selling Jesus’, on the soundtrack of the Kathryn Bigelow film Strange Days. After hearing the song ‘Selling Jesus’, radio ‘shock jock’ Howard Stern predicted that the band would become huge. In 1996 they were voted Kerrang!’s Best British Live Act and the following year they were nominated for Best Live Act and Best Group at the MTV Europe Music Awards.

In the ‘90s Skunk Anansie dominated the album charts with Paranoid and Sunburnt (1995), Stoosh (1995) and Post Orgasmic Chill (1996). They had a succession of hit singles including the devastating ballads ‘Brazen (Weep)’, ‘Hedonism (Just Because You Feel Good)’, and ‘Weak’, where, with her rich, soulful voice Skin seemed to reach deep inside to draw out powerful emotion. There’s also her personal favourite, ‘Secretly’. “You should have been by yourself/Instead of here with me…secretly,” she sang with operatic intensity, sounding like a collision between Robert Plant and Martha Wainwright.

Skunk Anansie toured globally with such acts as U2, Aerosmith, Lenny Kravitz, Veruca Salt, and Rammstein, and headlined Glastonbury in 1999. In 2001 however, they split up. “We’d burned ourselves out by working too hard. We were touring and recording constantly, all living separate lives. The chemistry and spirit disappeared. It’s not rock-by-numbers – you have to feel it,” says Skin.

She launched a solo career, releasing and touring the albums Fleshwounds in 2003 and Fake Chemical State in 2006. Spawning the hit single ‘Trashed’, Fleshwounds was a pared-down, soulful album. Skin describes it as “very down-tempo. That was my mood at the time, I was sad and melancholy, I’d had a relationship that fell apart.” Fake Chemical State saw her in a more upbeat, mischievous mood. “That album was happier, rock-tastic. I was on my way back to Skunk Anansie, to myself.”

The band got back together, and in April 2009 played two shows at London Water Rats (former Splash Club and the place where they’d started). The gigs sold out in five minutes. That year they released the ‘greatest hits’ album Smashes & Trashes (which included three new tracks and a Remix collection) and did a sell-out European tour. “It’s been very natural and unforced – a bit like coming home. We have a huge fanbase that’s been screaming out for us to do some work,” Skin said of their reunion. “We got back together because we have a strong chemistry. It’s all about the future for us, not the past.” Fired up by their tour the band went into the studio in spring 2010 and recorded their fourth album Wonderlustre, a set that flows from soaring and elegaic to locked-down, sensual and funky. Released in September 2010, the album includes the declarative single ‘My Ugly Boy’ (which was featured exclusively on Kerrang.com) and the gothic, slow-burning ‘My Love Will Fall’.

As well as fronting one of the UK’s key bands, Skin is a multi-talented artist involved in varied projects. She is also an established DJ, playing “tech house, minimal, and then I’ll throw on a rock record in the middle to fuck everybody up!” She has played out at classic venues like Club Q in Zurich, with such DJs as Martin Buttrich, Clive Henry and Smokin Jo, Luciano.

She has contributed guest vocals to numerous projects, including ‘Carmen Queasy’ from Maxim (from the Prodigy’s) solo album Hell’s Kitchen, and ‘Meat’ from Tony Iommi’s album Iommi. Her 2008 song ‘Tear Down These Houses’ featured on the soundtrack to Silvio Muccino’s film Parlami d’Amore, and was nominated for an Italian Oscar.

With her trademark bald head and striking image, Skin has also become a muse for key photographers like Mario Testino, Nick Knight and Derek Santini. She has modeled for top fashion designers, wearing Alexander McQueen for Fashion Rocks in 2003, and then Gucci in 2005. She has also modeled for Gianfranco Ferre and the Italian couture designer Liborio Capizzi. “I love fashion. It’s an art form,” says Skin. “If you’re the lead singer of a rock band you have your picture taken non-stop, and it’s interesting to develop the visual side. I’m not typical fashion, a blank canvas. I come with personality, a canvas with lots of colours!”

And away from the limelight, Skin does a lot of charity work. She has been involved with The Medical Foundation and the Baobab Foundation, charities that focus on torture victims and asylum seekers. “I have done music therapy with asylum seekers and help them integrate into society. I’ve worked with young people who come to this country with no papers, some have been pulled from rape camps, some are child soldiers. They’ve been through so much.” She is also actively involved in the global campaign against genital mutilation. “It is a basic human right for women of all cutlures to hold and express our sexuality and keep/control the heart of our womanhood” she asserts.

So Skin remains a pivotal force in music – not just as a rock singer but also as and cultural icon. Continually pushing boundaries, she proves that one’s potential can be limitless. From the beginning she forged her own way. As she says: “A bit of anger can be very useful in the right place and time, it gives you sparks, gets you moving, feeds your passion, separates the girls from the toys!”